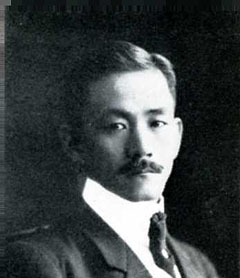 1870-1933. Children’s story writer. In 1887, he joined Kenyusha, headed by Koyo Ozaki. He published colloquial-style novels such as Satsuki Goi in the bulletin Garakuta Bunko and attracted attention as an up-and-coming writer. In 1891, he published Koganemaru in Shonen Sekai, a story about a dog, and became the pioneering figure of creative children’s stories. In his twilight years, he toured many areas of Japan and enthusiastically performed Otogi Koen, in which he read fairy tales to boys and girls.
Frequented Koyokan and became the inspiration for Konjiki Yasha

He was friends with the coterie of Kenyusha, such as Koyo Ozaki, Bizan Kawakami, and Keishu Takeuchi, and enjoyed his youth at the Koyokan in Shiba Park, which was a first-class salon in the Meiji era. Sazanami was popular among young ladies in Koyokan and became famous as the model for Kanichi in Koyo Ozaki’s outstanding work, Konjiki Yasha.

Sazanami, who became a leading figure of children’s literature, established his household, Shiba Takanawa, in 1907 in Minami-machi. his became his last residence. He built “Senrikaku” in a corner of his garden where he exhibited his collection of toys, calligraphic works, paintings, and items associated with horses of all ages and cultures. He opened Senrikaku to the public for free every Sunday.