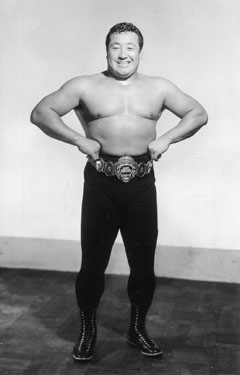 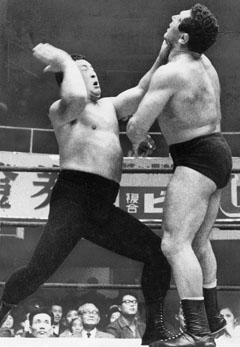 1924-1963. Professional wrestler. Born in South Hamgyong, North Korea, he joined the Nishonoseki sumo stable in 1939. Although he rose to the status of Sekiwake, he changed his career to professional wrestling in 1951 and fueled a professional wrestling craze with his karate chops. A match with the Sharp brothers in 1954 was broadcast on street TV and excited all of Japan. There is currently a campaign by his bereaved family to build a Rikidozan Memorial Hall.
Dreamed of turning Akasaka into “Riki KInddom”

Rikidozan showed not only talent as a fighter, but also as an entrepreneur. He built the luxurious 8-story Riki Apartments with a swimming pool; operated hotels, night clubs, and condominiums; and dreamed of turning Akasaka into “Riki Kingdom.”

Rikidozan, who was the symbol of postwar rise and the new hero of the TV age, was always surrounded by glamorous people such as foreign wrestlers, financial leaders, politicians, popular writers, and show business talents. Rikidozan adored America and loved using the restaurants and bars in Roppongi frequented by American soldiers for his social events.