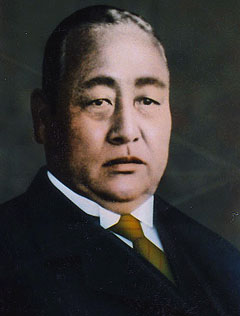 1869-1934. An industrialist. Shotaro learned how to repair and reconstruct lathes at Tanaka Seisakusho (predecessor of Toshiba). In 1889, he established the Ikegai Factory (the latter Ikegami Tekkosho and present Ikegami Ltd.) and produced the first domestic lathe that year. He subsequently expanded the business and produced machine tools and oil engines, including the Ikegai-style standard lathe, with his younger brother Kishiro. He acquired more than 100 patents and left a trailblazing footprint in Japan’s field of machine tools. After his death, his son Katsuo assumed his name and became Shotaro II.
The first domestic lathe was created in a small local factory in Shiba

The Ikegai Factory, which sprang from Tanaka Seisakusho with seed money of 90 yen, was situated in Kanesugi Kawaguchi-cho, Shiba (now Shiba 4-chome). It was started by just four people: the 20-year-old Shotaro, his 12-year old brother Kishiro, a finisher, and a tool operator. They produced parts after the English-style lathe in the factory and made two English-style 9-foot lathes. Producing the first domestic lathe was innovative at a time when Japan was relying on imported machineries. Legend has it that the lathes were used in many local factories for about 40 years, until early Showa, suggesting that they were of high standard as machine tools of that time. Moreover, they succeeded in producing the first domestic oil engine after moving the factory to Shiba Tamachi 3-chome. The business grew rapidly, and the small local factory became Japan’s leading machine tool manufacturer of Meiji. By 1913, Ikegai established the Ikegai Ironworks in Honshibairi Yoko-cho. The brick headquarters factory was on the east side of the present NEC head office building (Shiba 5-chome).