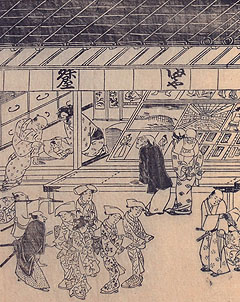 Unknown-1823. The fourth Ichibei Izumiya of Kansen-do, which is one of the leading publishing houses of Edo. Ichibei Izumiya (abbreviated name “Izumiichi”) started as a publisher that handled books related to Buddhism at the end of the 17th century. From the time Izumiya IV took over as the head of the family, it is believed that the business thrived as a wholesaler of Edo books, publishing and selling recreational books for the common people, including ukiyo-e and kusazoshi picture books. The name Ichibei Izumiya was passed down to the eighth generation over nearly 200 years. After Meiji the name changed to Ichibei Yamanaka, and the company published and sold textbooks and dictionaries.
The publisher of Shiba bestowed favors on Toyokuni Utagawa

Ichibei’s shop was near Shiba Shiinmei Jingu Shrine (now Shiba Daijingu Shrine) in the present Shiba Daimon 1-chome, Minato City. The area of Shiba had a concentration of many Edo book wholesalers next to Kanda and Nihonbashi. It was near the center of Edo, and because of its geographical location near the Tokaido highway, it was Edo’s leading amusement center with rows of theaters, variety show venues, and eateries. It was the perfect place for producing and selling colored ukiyo-e and kusazoshi picture books as entertainment and Edo souvenirs.
Ichibei Izumiya IV flourished from 1789 to 1801. He gained his ability as a wholesaler of Edo books by publishing kusazoshi picture books, colored ukiyo-e, and splendidly colored picture books by popular writers and ukiyo-e artists. On New Year’s day in 1794, he employed an up-and-coming ukiyo-e artist, Toyokuni Utagawa (original Toyokuni Utagwa: Born in Mishima-cho, Shiba Jinmei) and published a series called “Yakusha Butai no Sugata-e” (Portraits of Actors on Stage). The series became a hit and continued to be published until 1796. It was Toyokuni’s debut, which enabled him to gain an impregnable position as a popular artist, and he worked actively until his last days. Moreover, Toyokuni I turned out major ukiyo-e artists of the next generation, including Kunisada (Toyokuni III) and Kuniyoshi. The tomb of Ichibei is in Kagaku-in Temple in Shiba Koen (closed to the public).