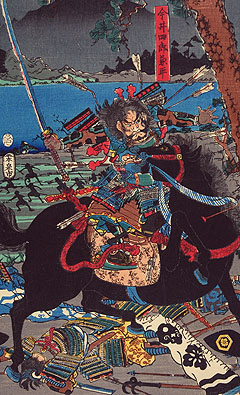 Kanehira Imai関連写真
The picture that Imai Shiro is defeated and killed in Battle of Awazu by Utagawa Yoshikazu Jul.1852 A Collection maintained by the Minato Local History Museum

1152-1184. Kanehira was a samurai and the retainer and foster brother of Yoshinaka Minamoto (Kiso). In 1180, he followed Yoshinaka’s army as one of Kiso’s four heavenly kings and fought throughout the country. In 1183 he distinguished himself by defeating Moritoshi Taira, and after the event he continued to lead the campaign against the Taira clan.
However, he later became rivals with Yorimoto Minamoto, who was the ally of Master Yoshinaka and was defeated in the battle of Ujigawa in 1184. At the place where they retreated, Kanehira advised Yoshinaka to commit a ritual suicide, and he himself was killed in battle.
The origin of Azabu Imai-cho is the epic of Kanehira Imai

Legend tells us that the whole area where Kanehira’s castle was situated during Edo was called Imai Village, which before Edo was expansive and included Akasaka Tameike, Torano-mon, Shiba Nishikubo, Roppongi, and Aoyama. In 1654, however, the agricultural fields of Imai Village were claimed by the shogunate government, and Mure (now Mitaka) was bestowed as a replacement. Since the replacement land was so far away, the villagers refused to relocate and gathered around Imai-cho. That is the origin of Imai-cho, Imaitera-cho, and Imaisanya-cho. There are no remains of the castle in Akasaka Hikawa Jinja Shrine, and it is believed that the story of Imai Castle has little credibility.