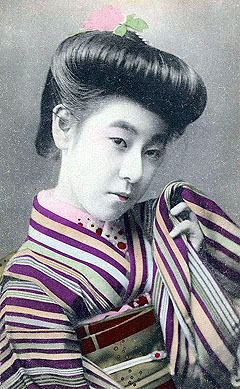 1896-Unknown A geisha of Shimbashi. Born in Nagoya. The second Eiru and her real name was Rino Ito. On New Year’s day in 1910, Eiru debuted at the age of 14 from Kiku Mimasu and enjoyed popularity as a famous and respected Geisha. After the Japanese-Russo War, the genroku pattern boom created by Mitsukoshi (later Mitsukoshi Department Store) rapidly became popular, and she worked actively as a model during that time. She was featured in the photo book Zenkoku Shin Hyaku Bijin (New 100 Beauties of Japan) and in magazines and on postcards; her pictures sold as fast as they could be printed. However, she contracted typhoid and disappeared from center stage.
The Geishas of Shimbashi in the Taisho period appeared like comets and attracted great popularity

Between the late Meiji and early Taisho periods, when high fashion was the rage, the geishas of Shimbashi and Akasaka who dressed in the latest fashions were the pop icons of commoners, and their portrait prints and postcards were distributed in large quantities. The most popular of them all was Eiru II of Shimbashi, who was working actively as a model for the Sekiguchi Clothing Store, Momotani Juntenkan, and Mitsukoshi, and even such images as “Six Prints of Eiru’s High Fashion” were sold. Eiru II succeeded Eiru I, who was one of the First Septet of Shimbashi, a group of top class geisha beauties created with the support of wealthy merchants and gentlemen, and attained the position of a famed geisha with one of the septet, Oimatsu. In her private life, she was romantically linked with the actor Takeo Kawai and catapulted to the position of most popular woman of the moment. However, there was a lot of mystery surrounding her ending, and a magazine from that time wrote “Eiru has been hospitalized and will never return to the world.” However, some say that she later became the proprietress of a pawn shop in Shimbashi. Incidentally, in the pre-World War II film Zangiku Monogatari (Tale of Zangiku), by director Kenji Mizoguchi, Nobuko Fushimi played the role of the geisha Eiru.