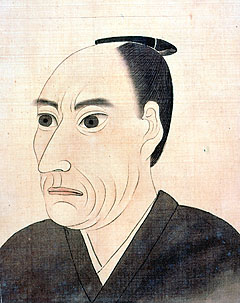 1801-1855. A scholar of warfare and a civil administrator. As his family members had been for generations, Tarozaemon was the successive governor of Izunokuni Nirayama. Tarozaemon was familiar with the conditions of the people from the time he was appointed governor of Izunokuni Nirayama. He was an honest worker who listened to the views of the agricultural policy administrator and thinker, Sontoku Ninomiya, and was called “Edo’s God of Social Reform.” After becoming conscious of naval defenses, he learned artillery from Kazan Watanabe and Western artillery from Shuhan Takashima and served as a professor of artillery. Tarozaemon got on the wrong side of Yozo Torii, the Edo Magistrate who disliked Western studies, and nearly fell from power in the bribery case of Bansha, but he was rescued by Tadakuni Mizuno, was later promoted by the top leaders of the shogunate government, and built six gun batteries. He devoted himself throughout his life to naval defense, building foundries and air furnaces in Nirayama and producing canons and guns. He is also known as Hidetatsu Egawa.
Odaiba and hardtack were the products of naval defenses

A gun battery (daiba) is a man-made island for artilleries. They were for shooting foreign vessels trying to invade Japan. Tarozaemon designed 11 batteries but completed only six, using soil cut from Mt. Gotenyama in Shinagawa and the mountain in front of Sengaku Temple and rocks transported from Izu and Awa. However, the construction work was canceled because of the treaty of peace and amity between Japan and the United States. The third battery in Minato City is today preserved as Daiba Park, and the sixth battery is preserved with hardly any modification as a sanctuary for wild birds. Torazaemon baked hardtack as ready-to-eat food for soldiers following the method taught by a student of Shuhan Takashima, and the Japan Bread Association called him the “Father of Bread” of Japan. After his death, his son Hidetoshi executed his father’s will and built an artillery practice field in Shiba. It was located on the north side of today’s Hamamatsu Station and was in use as the Egawa Training Center until the restoration of Imperial power in 1868.