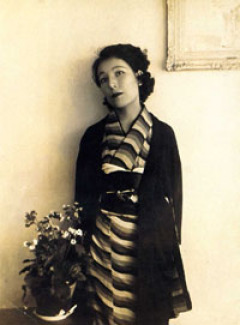 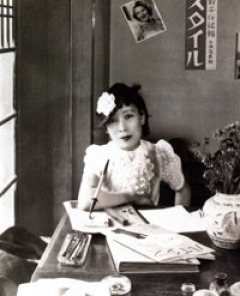 Chiyo Uno関連写真
(Top)Time of 35years old. Her Kimono was desighed by herself (Bottom)Time of 39 years old. At editorial office Style Offered by Atsuko Fujie

1897-1996. Writer. In 1936 she established Style Co. Ltd. and published Japan’s first fashion magazine, Style. Although the magazine was discontinued during the war, it became a huge hit when it was relaunched in 1946. She also appeared in the magazine as a model and became the heroine of the times. She was awarded the Noma Literary Award with her outstanding work Ohan in 1957. She also worked actively as a kimono designer, and the book she published at the age of 86 Ikiteiku Watashi (I Keep on Living) became a best seller.
The last residence of “the woman of Meiji who is often in love”

Chiyo Uno was described as “the woman who is often in love,” and was a writer whose way of life struck a responsive chord in many women. After her first marriage at the age of 13, she went through several marriages and divorces, and her life was enlivened by many lovers such as Seiji Togo. She also built 13 houses in her life as if to symbolize her stormy existence.

When her company's tax evasion came to light, she sold off her assets, including her most luxurious house, in Kobiki-cho, and moved into one in Minami-machi Aoyama.

For 40 years after the bankruptcy of Style until the death of her ex-husband Shiro Ozaki and the deaths of Seiji Togo, Jiro Aoyama, and others, her divorce from Takeo Kitahara, and receiving the Kikuchi Hiroshi award and the Geijutsuin Award, she spent an ever-dramatic and glamorous latter half of life for 40 years after the age of 58 in her house behind Aoyama Street.