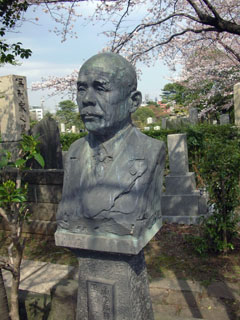 1860-1929. A photographer. Born in Musashi no Kuni Oshi (now Gyoda City, Saitama). In 1885, Kazumasa opened a photo studio Gyokujun-kan in Koji-machi, Tokyo, after studying photography and printing in Boston, USA. He photographed the treasures of old temples and shrines at the request of the Provisional Investigation Bureau of National Treasures of the Imperial Household Ministry. In 1889 he helped launch the art magazine Kokka by Tenshin Okakura and produced collotype-printed photographic plates. Kazumasa was also active as an instructor and researcher of photosensitized materials. He was a member of the Royal Photographic Society of Great Britain and the first photographer to be appointed an Imperial Artist.
Pioneer of the world of photography and printing; lived and worked actively in Azabu

Kazumasa discovered photography when he was 14, and through his education at Tsukiji College (formerly the Hepburn School and now Meiji Gakuin University), he interacted with frontline photographers in Tokyo. This led him to a passion for photography most of his life. His many valuable photographs ranged from people to scenic sites and documentaries, such as Tokyo Hyaku Bijin-cho (100 Beauties of Tokyo) and Nichiro Seneki Shashin-cho (Photographs of the Japan-Russo Campaign). The portrait of Soseki Natsume on the face of the 1,000 yen bill was also based on a photograph by Kazumasa. He made efforts to elevate the position of photographers, to popularize collotype printing and to produce photographic dry plates domestically. His achievements are praised highly to this day. His main residence was in Miyamura-cho, Azabu Ward, and he had a second home in Kazumi-cho in the same ward (now Nishiazabu). He married Kyoko, the third daughter of Taisuke Itagaki, who lived in Shiba. It was his third marriage (his first and second wives died of illness) The second home was mostly used for entertaining guests, and the 25th anniversary garden party of Gyokujun-kan was also held there in spectacular fashion. The funeral of Kazumasa, who died at the age of 70, was held at the Tokyo Aoyama Funeral Hall. A statue of Ksitigarbha Bodhisattva (Mahayana Buddhist) and a slate palette inscribed with his Buddhist name stand next to his tomb in Aoyama Cemetery, and his bust has been placed in the corner of the cemetery.