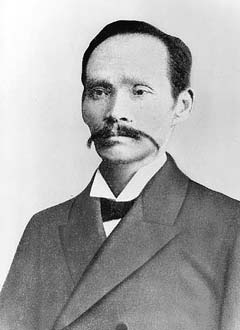 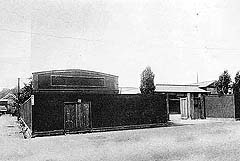 1848-1906. An industrialist. The youngest son of a farmer in Hiroshima. Kibataro learned silversmithing as a child. During the Choshu punitive expedition, he was in charge of making metal fittings in the clan’s weapons shop. In 1874, he moved to Tokyo, studied under Lewis Schaeffer in the telegraphic communication office machinery center of the Ministry of Engineering, and devoted his efforts to domestically producing telegraphic instruments. He formed a research group called Yaruki-sha in the center and developed the paper Daniell cell and lacquered wires. He resigned from the center and established Meiko-sha, a manufacturer of telecommunications equipment (later the Oki Electric Factory and the predecessor of Oki Shokai, the Oki Electric Industry).
The pioneer telecommunications business rose from a factory in Toranomon.

After arriving in Tokyo, Kibataro sent out his resume accompanied by a silver hand-made hair ornament, which demonstrated his silversmithing skills and proved effective, and he joined the telegraphic communications office (later telegraphic station) machinery center. His colleagues included Hisashige Tanaka II and Seiichi Moyoshi, who established a company that became the foundation of Toshiba. While honing his skills as an engineer at the Ministry of Engineering, Kibataro independently started a subcontracting factory for the telegraphic station in a tenement house owned by Yasuyo Ishimaru, the founder and head of the telegraphic office, in Shiba Nishikubo Sakuragawa-cho (now Toranomon 1-chome). Although the factory had only two foot-operated lathes, Kibataro steadily made preparations to become completely independent and in 1881 established an electric appliance manufacturer and retailer Meiko-sha in the Ginza. After changing the factory’s name from Meikosha to Oki Electric Factory, he gained an almost monopolistic position in Tokyo in the construction field and developed the company as the largest telecommunications equipment manufacturer. When he was commissioned to install the telephone system in the 12-story commercial building Asakusa Ryounkaku, which contained shops and observatory decks, it is said that he called attention to his technical ability by having visitors on different floors communicate with one another by telephone. During his time with Oki Co., Ltd., (formerly Oki Electric Factory), he also succeeded in producing the first Japanese magneto parallel multiple switchboard. The company opened other factories in Shibaura and expanded its business after Kibataro’s death. It later became Oki Electric Industry and on its 80th anniversary moved its head office to the present location in Toranomon(1-7-12 Toranomon).