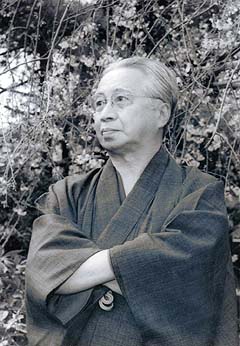 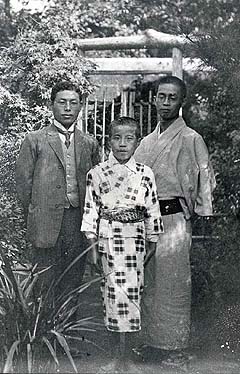 1897-1973. A writer. Born in Yokohama City. Jiro’s family moved to Tokyo, where he was raised, when he was in his first year of elementary school to make it easier for his two brothers to commute to college there. Following his graduation from Tokyo Imperial University, he worked temporarily at the Ministry of Foreign Affairs, but during the chaos of the Great Kanto Earthquake, he lost his job and decided to write novels for the masses. A series called Kurama Tengu, which he started in 1924, gained recognition, and in 1950 he was awarded the Japan Art Academy Award for Kikyo (Homecoming). He also wrote books of history and biography, such as the Century of Emperors, which became his last work. In 1964 he was awarded the Order of Culture.
Graduated with honors from Shirogane Jinjo Elementary School

The first place Jiro moved to in Tokyo was Waseda. When he was a sixth grader in elementary school, he moved to Sanko-machi, Shirogane, Shiba Ward, and entered Shirogane Jinjo Elementary School there. In his book entitled Watashi no Rirekisho (My Resume), he wrote that because the daughter of Tengai Kosugi went to the same school, he became interested in becoming a writer and went to see where Tengai lived. He was good at writing and art. He graduated from Shirogane Jinjo with honors and went on to Furitsu Daiichi Junior High School.
In the spring of 1912, when he was a senior at Furitsu Daiichi, his eldest brother Hoei, who was teaching English at Kofu Junior High School, got married, transferred to Azabu Junior High School in Tokyo, and set up his new home near Yonnohashi in Shiba Ward, which is where his family home was. Jiro’s father subsequently looked for a new place to live in the countryside in Komazawa Sakura-machi. With his father’s move from the city, Jiro decided to live in his eldest brother’s house. Hoei later became known as an essayist and astronomer, and Jiro, who loved reading, expanded his world of literature with the books on his brother’s bookshelves.