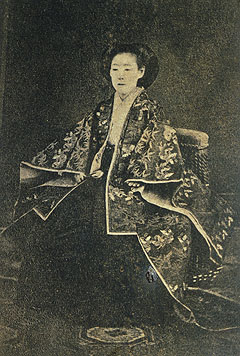 1846-1877. The wife of the 14th shogun Iemochi Tokugawa. The eighth-born princess of Emperor Ninko. Imperial Princess Chikako’s betrothal to Imperial Prince Taruhito, Prince Arisugawa, was annulled, and she was sent to marry Iemochi for a reconciliation between the Imperial court and the shogunate, which was being promoted by her brother Emperor Komei and Tomomi Iwakura. Although she overcame a feud with Tensho-in in the inner palace by the mediation of Iemochi, her husband died at Osaka Castle four years later in the second Choshu punitive expedition. After his death, she became a nun and called herself Seikan-in no Miya. In the Boshin War, she showed her support for the shogunate government by pleading to spare the life of Yoshinobu Tokugawa.
Lived in the mansion in Azabu for three years

Although she married reluctantly, Princess Kazu is said to have had a happy marriage with Iemochi. Perhaps it was her feelings for him that prompted her to write a letter to Emperor Meiji pleading for the life of Yoshinobu during the Boshin War. In the Meiji period, Princess Kazu returned temporarily to Kyoto, but at the suggestion of Emperor Meiji, she lived in the mansion in Azabu ichibei-cho from 1874 for three years. Princess Kazu’s tomb and Iemochi’s are both in Zojo Temple. After World War II, an excavation was carried out for reburial, and in the process, a burial accessory, a photographic dry plate of a male dressed in hitatare (traditional formal costume), and a tachieboshi (formal hat) were found. However, perhaps because of improper handling of the object, the image of the man in the photograph disappeared the next day, so it is unknown whose image it was. The theory that the image was Iemochi’s is widely accepted, but some say it was Prince Arisugawa’s. The memorial service for Seikan-in no Miya is held October 2 every year at Zojo Temple.