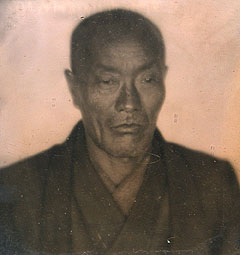 Komin Kawamoto関連写真
A collection maintained by The Japan Academy

1810-1871. A scholar of Western studies. The youngest son of the doctor of the Settsu Mita clan (Hyogo Prefecture). Komin studied Dutch medicine under Choshun Adachi and Nobumichi Tsuboi in Edo. He opened his practice a year after becoming a clan doctor. He was also versed in physics and chemistry and translated and published such books as Kikai Kanran Kogi (Broad Definition of the View of the Earth’s Atmosphere) on the systematics of physics and Eisei kiki Jutsu (Strange Machine of the Far West) on the mechanics of the steam engine. He succeeded in the first trial production of matches, telegraphic instruments, daguerreotype and collodion photographs, and beer. In 1859 he was appointed professor of the Bansho Shirabesho (school of Western studies established by the shogunate government).
Opened his practice in Shiba Rogetsu-cho and made achievements in the establishment and progress of natural history

Komin became a clan doctor with the backing of Lord Takakuni Kuki and went to Edo. He opened his practice in July 1835 in Shiba Rogetsu-cho, an old town along the Tokaido Highway that ran through Shiba Kuchihashi to Kanasugibashi. The practice was close to the clan’s mansion; Hamagoten Gardens was eastward on its coastal side, and Shiba Zojo Temple was farther south. At the end of the same year, he opened practice and married Hideko Aochi, the third daughter of Rinso Aochi, the leading scholar of Western studies in Edo. Since Rinso’s fourth daughter, Miyako, was married to Choei Takano, Komin and Choei were brothers-in-law. He later harmed someone with a sword and spent six years in confinement at home. During that time he worked on revising and enlarging Rinso’s Kikai Koran (View of the Earth’s Atmosphere, later, Broad Definition of the View of the Earth’s Atmosphere) and studied Seimigaku (chemistry). It was Komin who first replaced the term Seimigaku with Kagaku (chemistry). When Ryukoku took over as the head of the clan and retired to the mansion in Nihonenoki (now Takanawa), Komin decided to move to Tamachi in Shiba to be near the former head of the clan. Komin is also called the father of beer for brewing Japan’s first beer.