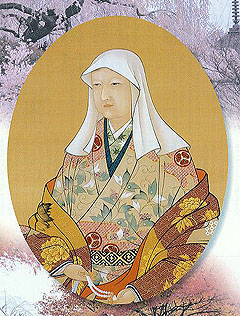 1627-1705. The birth mother of the fifth shogun Tsunayoshi Tokugawa. The second daughter of Nizaemon, a green grocer of Horikawa, Kyoto. Keisho-in entered into service at the inner palace as the adopted daughter of Munemasa Honjo, the Keishi (an officer responsible for running the household) of Nijo Kampaku (Imperial Regent). She was chosen by Kasuganotsubone (the nurse of the shogun Iemitsu), became the concubine of the third shogun Iemitsu, and gave birth to Tsunayoshi. She was called Otamanokata, became a nun after the death of Iemitsu, and called herself Keisho-in. She rose to Juichii, the highest position for women, and became the power behind Tsunayoshi’s policies. She was also very religious and contributed to building Gokoku Temple and restoring many temples and shrines.
The mother of Inukubo Tsunayoshi (nickname) rests in Zojo Temple

When Otamanokata was a small girl, a priest was said to have predicted that she would rise to greatness. Just as in the prediction, from being a daughter of a green grocer, Keisho-in rose to the highest possible position a woman could attain. It is a widely accepted theory that her name is the pronoun of Tamanokoshi (Japanese expression for marrying into money) because of her name and how she advanced in the world. In 1680, when Tsunayoshi assumed the role of shogun, she moved into Sannomaru in Edo Castle and intervened in politics. It is generally believed that the famous law against the harming of animals was drawn up by Keisho-in pressuring Tsunayoshi following the suggestion made by her favorite high priest, Takamitsu. The Matsu no Roka Jiken (the incidence in the Matsu hallway) caused by Asano Takuminokami Naganori at Edo Castle happened during a visit by the Imperial envoy to announce Keisho-in’s new position as Juichii. In Zojo Temple in Shibakoen, where Keisho-in is buried, there are tombs of six shoguns, including the second shogun, Hidetada, and the sixth shogun, Ienobu, as well as the wives and concubines of each shogun. The Inukimon Gate of the Tokugawa tomb is registered as the City’s tangible cultural property and was originally in front of Ienobu’s tomb. It is a Chinese-style bronze gate decorated with castings of ascending and descending dragons on either side of the gate. The 10 hollyhock crests on the door were added after World War II.