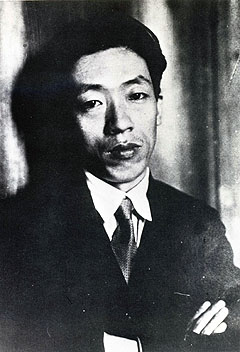 1903-1933. Born in Akita Prefecture. Graduate of Otaru Kosho (now Otaru University of Commerce). Takiji started writing when he was a student; he held great respect for Naoya Shiga. During his time with the Hokkaido Takushoku Bank, he was deeply into the trade union movement and socialism and was recognized as a proletariat writer for his work Kanikosen (The Crab Canning Boat) and Fuzai Jinushi (The Absent Landlord). He went to Tokyo after being fired from the bank, worked as the general secretary of the Japan Proletariat Writer’s League, and joined the Japanese Communist Party. On February 20, 1933, he was arrested for violating the Peace Prevention Law and was tortured and killed in Tsukiji Police Station the same day.
This proletariat writer continued with underground activities around Azabu Jubanchi.

Pursuing proletariat literature meant being chased by the special police force. With the serious crackdown on cultural organizations in 1932, Takiji became involved in underground activities. His hideouts were between Azabu, Jubanchi, and Roppongi. He started living with his new bride, Fujiko Ito, in a room in a small house in Shomyo Temple at Higashi-machi, Azabu Ward (now Minamiazabu 1-chome), and then moved to Shinami-cho, Azabu Ward. A coffee house in a fruit shop called Yamanakaya along Juban Street was where he secretly met with his mother, Seki, and brother Sango. His third hideout was a house in Sakurada-cho, Azabu Ward (now Nishiazabu 3-chome), but because Fujiko was apprehended at work as a result of police investigations, they moved to Shibuya Ward. A month later, Takiji was arrested in a safe house in Fukuyoshi-cho, Akasaka, and died a violent death. His book, based on his underground life, To Seikatsuha (Life of a Party Member) was released as his last work under another title Tenkan Jidai (Age of Change) by Chuo Koron. Naoya Shiga, who had a close friendship with Takiji, also wrote two letters addressed to him and a tribute to his memory addressed to his mother, Seki, in the first issue of Bunka Shudan.