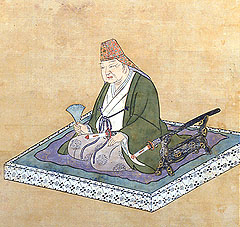 1745-1833. The 25th Lord Shimazu. Shigehide is referred to as the typical Ranpeki Daimyo (a daimyo devoted to Western studies) for his enthusiasm to absorb new knowledge of the West through Western studies. He worsened the finances of his clan by extensively compiling books and making heavy outlays on socializing as the father-in-law to the 11th shogun, Ienari. He was outraged by the thorough belt-tightening policy implemented by Narinobu, his successor, and his retainers and caused an uproar, forcing Narinobu to retire and penalizing the retainers. However, he cleared the clan’s debts at once by recruiting the chief retainer Hirosato Zusho to implement radical financial reforms and continued to rule the clan.
Built a Western-style garden in Takanawa’s Yomogiyama-kan

A daimyo who leased many mansions in Edo, such as the main residence, a residence for personal use, and a townhouse. While the main residence was used for administering affairs and the residence for personal use was lived in by the daimyo’s family, the townhouse was a sort of villa, and it often had a garden. Shigehide built a Western-style building called the Yomogiyama-kan and a garden in his private residence in Takanawa (the area of the present Shintakanawa Prince Hotel), grew various plants, and kept rare birds from abroad. He compiled the Ryukyu Sanmonoshi (Natural History of Ryukyu Wild Life) and Seikei Zusetsu (Illustrated Book of Agriculture). Shigehide, who ordered the construction of such facilities as the Zoshikan (clan’s school), was stalwart, and his appetite for knowledge did not dwindle even when he retired. Philipp Siebold, who met Shigehide when he was 84, was surprised to see how energetic he was. So surprised was Siebold that he wrote, “Lord Shigehide asked me how to stuff animals and birds!” Shigehide died at the age of 89 in the clan’s mansion in Takanawa.