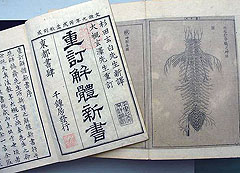 1733-1817. A medical scientist and scholar of Western studies in the mid- to late Edo period. Genpaku was born in a mansion belonging to the Kohama Clan in Ushigome Yarai, Edo. In 1771, at the age of 39, he attended an autopsy at the execution site in Kotsukahara with medical scientists and scholars of Western studies Ryotaku Maeno and Junan Nakagawa. Witnessing the autopsy, he was surprised to discover the extreme accuracy of the Dutch medical book Ontleedkundige Tafelen and decided to translate it. Before long, he started a reading session with Ryotaku Maeno at the Buzen Nakatsu clan mansion (area of the present Seiroka Hospital) and after four years completed the Kaitai Shinsho (The New Book of Dissection). He described the trouble he went through in writing the book in his autobiography Rangaku Kotohajime (Beginning Western Studies), which he wrote at the age of 82.
Studied Dutch medicine under Gentetsu Nishi of Nihonenoki

Genpaku’s father, Hosen Sugita, was a clan doctor who studied Dutch medicine, but Genpaku started to study medicine seriously only when he met the Dutch surgeon Gentetsu Nishi. He was 17 when he joined Gentetsu’s school. Legend has it that it was Genpaku’s wish to study under Gentetsu, which was approved by Hosen, his father. Gentetsu Nishi was the private doctor of the shogunate at that time and was living in Nihonenoki in Takanawa (some say that it was Roppongi in Azabu). Genpaku commuted daily from Yarai in Ushigome to Gentetsu’s place to study medicine. Because of his efforts, by 1752 he had become a clan doctor and had begun to frequent the main residence of his master, Lord Kohama.
Genpaku’s tomb is in Eikan-in Temple in Toranomon (commonly known as Sarudera), and his tombstone is inscribed Sugita Sensei no Haka (The Tomb of Doctor Sugita, Blessed with Nine Happinesses).