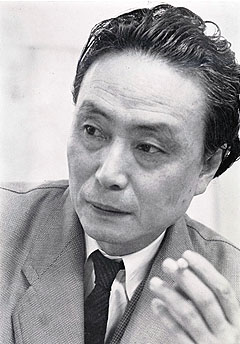 1907-1965. A writer and poet. Born in Fukui Prefecture. Jun’s real name was Yoshio Takama. He had been drawn to the Shirakabaha (The White Birch literary group) since he was in his early teens. When he enrolled at Tokyo Imperial University, he joined a leftwing artists’ association and published his work in its official publication, the Sayoku Geijutsu (Leftwing Arts) and others. Following his graduation from the university, he worked as a proletariat writer while working for Columbia Records. In 1932, he was apprehended for violating the Peace Prevention law and was forced to make a turnaround of his political views. In 1935, he wrote Kokyu Wasure Ubeki (Should Auld Acquaintance be Forgot?), applying a technique called Jozetsu style (babblings) and was short-listed for the first Akutagawa Award. In his last days, he conceived the ideas for a series called Gekiryu (Violent Current), Iyana Kanji (A Disagreeable Feeling), and Oinaru Te no Kage (In the Shadow of a Large Hand), which depicted the era of Showa and began writing them, but he died in 1965 at the age of 58 without completing the series.
Jun Takami moved around Azabu during his poverty-ridden childhood

Jun Takami was born out of wedlock to Sannosuke Sakamoto, who was the uncle of Kafu Nagai, the governor of Fukui Prefecture. After his father was transferred to Tokyo in 1908, Takami, his grandmother, and his mother followed his father to Tokyo and lived in Azabu. He enrolled in the Azabu Higashi-machi Elementary School when he was 6. His mother made a living as a seamstress at home, but their lives were very hard, and they moved around Higashi-machi, Takeya-cho, and Niibori-cho during his preteen years. From an early age, he was disciplined by his mother to become a politician and to get even with his father. However, against his mother’s ulterior motive, he enrolled in the Department of English Literature, Faculty of Letters, at Tokyo Imperial University.
Jun lived in a shabby row house at the edge of Azabu’s wealthy area and was in a predicament that forced him to be aware of class differences. He wrote about the difficulties he had during half of the life he lived as a bastard ignored by his real father in an essay entitled Watashi ni Okeru Kurai Shussei no Kage ni Tsuite (The Dark Shadow of My Origin). His funeral was held at Aoyama Funeral Hall with Yasunari Kawabata, the renowned writer and friend, at the head of the funeral. Now there is the Jun Takami Library at HIGASHI MACHI elementary school in Minato City.