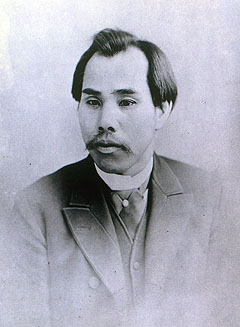 1846-1905. An industrialist. Hisashige was the son of a goldsmith in Kurume, Chikugo, and the adopted son of Hisashige Tanaka I, the so-called Karakuri Giemon, who was known as one of the few inventors of that time. In 1873, Hisashige arrived in Tokyo with his adoptive father and started producing telegraphic instruments. He changed his name from Daikichi Tanaka to Hisashige II and took over the Tanaka Factory, which was set up by Hisashige I in Ginza, and established the Tanaka Seizosho (later Shibaura Seisakusho, now Toshiba) in Shibaura. He also produced naval weapons. After his retirement, he founded the Tokyo Sharyo Seizosho, a rolling stock manufacturer, in Fukagawa and also worked actively as a machinery tradesman.
Built the foundation of Toshiba in Shibaura

During Meiji’s cultural enlightenment, Hisashige and his father arrived in Tokyo at the request of the Meiji government, which was facing the urgent task of producing telegraphic instruments domestically. They first rented the second floor of Daisen Temple (no longer in existence) in Azabu Imai-cho (now Roppongi) as their workshop and the Kannondo Temple in the temple grounds as the blacksmith’s workshop and began working on producing telegraphic instruments. After leaving Shiba Nishikubo Kamiya-cho, in 1875 Hisashige I set up a shop-cum-factory in the brick-building area of Ginza, which became the foundation of Toshiba. Back then, Daikichi is said to have run a shop similar to his father’s near his father’s factory while working for the telegraphic communication office’s machinery center in Shiodome (now Higashi Shimbashi). In 1882, after Hisashige’s death, Daikichi established the Tanaka Seizosho on a 10,000-square-meter site in Shiba and built the foundation of the electronics industry by focusing on electrical machines. This machinery factory was equipped with four steam engines for power, and it was of the largest scale as a private factory with approximately 700 employees during its heyday. The factory’s dynamic exterior could be seen from Hamamatsu Station and Tamachi Station and was a popular sight among commuters on the Tokaido Line. However, most of it was destroyed by fire during the Great Kanto Earthquake.