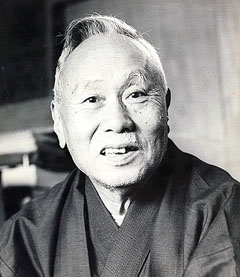 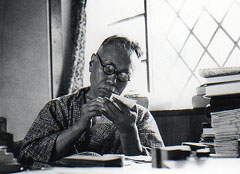 1890-1990. A poet. Born in Takasaki City, Gunma Prefecture. Bunmei learned Haiku from his uncle, who raised him. He submitted his haiku and 31 syllabled verses to the magazine Hototogisu while he was a student at the old Takasaki Junior High School. When he graduated from school, he arrived in Tokyo depending on the poet and writer Sachio Ito, who was introduced to him by his former teacher and became the youngest coterie of the newly launched magazine Araragi. In 1925, he published his first songbook, Fuyukusa (Winter Grass). In 1930 he replaced the poet and psychiatrist Mokichi Saito to become the editor and publisher of Araragi. He was a member of the Japan Art Academy. He received the Order of Culture in 1986.
Wrote about his days of old age in poems while in Aoyama

In May 1945, Bunmei was in an air raid at his home in Aoyama Minami-cho, and in June, he evacuated to Agatsuma Haramachi in Gunma Prefecture.
He returned to Aoyama Minami-cho in 1951. He was already 61, but he continued to write poems energetically and published works such as the songbook Seinanshu (works produced from the age of 62 to 71) and Zoku Seinanshu (works produced from the age of 71 to 76). Bunmei’s work was called Bunmei style or new chosisme because of his style of looking straight at reality, omitting lyrical verses and sentimental expressions that are attached to words. During World War II, he used anger toward fascism and life and death surrounding the war as his themes, but following Seinanshu, he studied the life of the common folk and wrote about the deep emotions of old age.