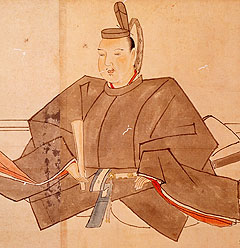 1662-1712. The 6th shogun. The son of the governor of Kofu, Tsunashige Tokugawa. Ienobu succeeded as the head of the Kofu Tokugawa family. He became the adopted son of his uncle, the 5th shogun, Tsunayoshi, who was childless, and succeeded as the 6th shogun. Ienobu implemented Shotoku no Chi, politics based on Chinese philosophy, and abolished the law of protection of animals with the help of his private secretary, Akifusa Manabe, and the Chinese philosopher, Hakuseki Arai. Because he was first raised as the son of a retainer, he was knowledgeable of the conditions of the lower classes. He was also known as a studious shogun who had Hakuseki Arai compile a history of daimyo entitled Hankanfu.
Splendid mausoleums of the shogun family were in Zojo Temple

Ienobu died without finishing his work and was buried in Zojo Temple, according to his will. Zojo Temple is known as the family temple of the Tokugawa family, along with Kanei Temple in Ueno. In Zojo Temple, six shoguns are laid to rest: the 2nd, Hidetada (posthumous name, Daitoku-in); the 6th, Ienobu (Bunsho-in); the 7th, Ietsugu (Yusho-in); the 9th, Ieshige (Junshin-in); the 12th, Ieyoshi (Shintoku-in); and the 14th, Iemochi (Shotoku-in). The Tokugawa family’s splendid mausoleums were elegant structures that were described in the writer Kafu Nagai’s book Reibyo (Mausoleums) as “majestic and beautiful.” However, most of them were destroyed in the air raids on March 10 and May 25, 1945. From 1958, an excavation survey of the tombs was conducted with reburials. The remains were found well preserved, and Ienobu’s beard was found. It is said that he was of slight build and had a beautiful face of a noble gentleman.