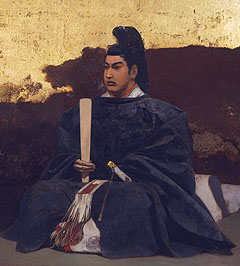 1846-1866. The 14th shogun. Iemochi, was born into the Kishu Tokugawa family and was first called Yoshitomi. He became the successor to the 13th shogun, Iesada, and became the shogun assuming a new name, Iemochi. When Naosuke Ii, who resolutely carried out the Arrests of Ansei, in which many daimyo, nobles, and loyal supporters of the Emperor were arrested for their antishogun activities, fell ill, his successor, Hirochika Kuze, and daimyo, Nobumasa Ando, had the Emperor’s daughter, Princess Kazu, marry Iemochi in the interest of reconciliation between the Imperial court and the shogunate. Before long, Iemochi went off to the second Choshu punitive expedition, but the political and military confederacy of the Satsuma and Choshu clans were already formed. Many clans did not cooperate in the expedition, seeing that the weakening of the shogunate, and the shogun’s forces were completely defeated.
Shogun Iemochi submitted a letter of resignation, which was unprecedented.

Iemochi became shogun at the age of 13, nominated by Naosuke Ii, in spite of the powerful influence of Narioki Tokugawa of the Mito Tokugawa family, who nominated Yoshinobu as shogun. Iemochi was 17 when he welcomed Princess Kazu as his bride from Kyoto. He had a gentle nature and was kind to her, and they lived happily. However, the 20-year old shogun followed a rocky road, failing in the second Choshu punitive expedition because of a lack of cooperation by many clans to support the shogunate. Furthermore, Iemochi was shocked by the infringement on official authority in which two of his councilors, Masato Abe and Takahiro Matsumae, were dismissed by order of the Imperial court, which wielded antiforeigner principles surrounding the opening of the Hyogo Port. This resulted in the unprecedented situation of Iemochi handing in a letter of resignation to the Imperial court.The letter was not accepted, and Iemochi’s anxieties increased excessively. He died at the age of 21.