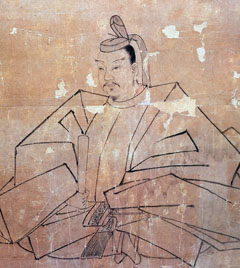 1579-1632. The third-born son of Ieyasu Tokugawa and the 2nd shogun. Hidetada was late for the Battle of Sekigahara because Masayuki Sanada prevented him from reaching Nakayamado to attack Ueda Castle, and for this Hidetada was severely reprimanded by his father, Ieyasu. Before long, he and two shogunate elders, with Ieyasu, who retired as the 2nd shogun, developed shogunate politics. Hidetada went into the winter and summer battles of Osaka and overthrew the Toyotomi family. After his father’s death, he worked on reinforcing the authority of the shogunate by reappointing about 41 daimyo, forcing Emperor Gomizunoo to resign in the Shie incident (the great conflict between the shogunate and the Imperial court). In this way, Hidetada ruled even though he had retired from his position as shogun and had been succeeded by the 3rd shogun, Iemitsu.
The gate of Hidetada’s mausoleum stands in Shibakoen

Hidetada and his wife, Oeyo, (sister of Yodo, Hideyoshi Toyotomi’s concubine) favored Tadanaga over their first-born son, Iemitsu. This nearly put Iemitsu’s appointment as the 3rd shogun under threat. Iemitsu’s memory of his bitterness later drove Tadanaga to commit ritual suicide. Iemitsu heavily favored his stepbrother, Masayuki Hoshina. The Hoshina family, which was valued by Iemitsu, was later given the surname Matsudaira and granted a main residence (later used as the family’s private residence) in the present Shiodome as the Aizu Matsudaira family. The descendant of Matsudaira, Katamori, served the shogunate as the Kyoto Magistrate at the end of Edo. When Hidetada died, he was buried in Zojo Temple with the posthumous name Daitoku-in, and Iemitsu built an impressive mausoleum for him. The mausoleum burned down in World War II but its beautiful gate still remains in Shibakoen (Japan’s important cultural asset). According to an excavation survey carried out with the reburial after the war, Hidetada had a well-trained body fit for a samurai of the age of provincial wars, unlike other shoguns, who had noble figures.