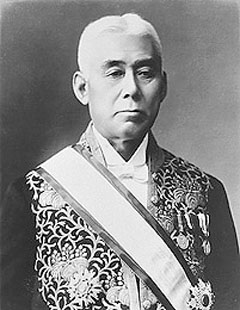 1856-1921. A politician. Born in Michinoku Morioka. Takashi dropped out of the law school run by the Department of Justice. His abilities were recognized by the politician and diplomat Munemitsu Michinoku, and he successively served as the Vice Minister of Foreign Affairs and the Consulate General of Korea. At the age of 42, Takashi was appointed president of Osaka Mainichi Newspaper. He participated in forming the Rikken Seiyu Party and later became the prime minister of Japan. Takashi was successively elected as a member of the House of Representatives. In 1918, he formed the party cabinet as the prime minister with all the members of the Seiyu Party, except for three ministerial positions for military, naval, and foreign affairs. On November 4, 1921, he was assassinated by Konichi Nakaoka in front of Tokyo Station. He was 65.
The “Commoner Prime Minister” lived in Shibakoen

From Meiji to Taisho, the area of Mita Shiba had the private residences of Takashi Hara, Masayoshi Matsukata (head of the Satsuma clan and politician), and Taro Katsura (head of the Choshu clan and politician), and it looked like a town of ministers. Takashi had an active public life based in his home in Shibakoen. The headquarters of the Rikken Seiyu Party, which was formed around Hirofumi Ito (politician and the first prime minister of Japan) and developed by Takashi, was also in Shibakoen. Once Takashi became the prime minister, he formed the Seiyukai Cabinet by abolishing the traditional dominating and important cabinet positions by members of the same clan and denying the influences of government officials and the House of Lords. Takashi was the first member of the House of Representatives without a title to become prime minister and was popular among the people as the “Commoner Prime Minister.” However, he was murdered three years after assuming his post. His wife, Asa, who rushed to Tokyo Station, was reputed to have refused sending his body to the official residence of the prime minister and asked the officials to send him home, since he had no more to do at the official residence and that was his wish as well as hers. Legend has it that Takashi met his wife at a Western restaurant called Sanentei in Shibakoen.