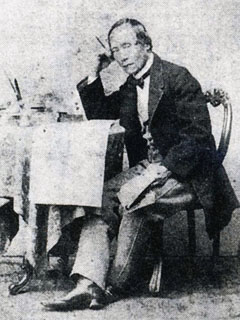 1820-1885. A samurai of the Enshu Kakegawa clan (Shizuoka Prefecture). Dressed in a priest’s habit, Kosai made an approach to the Russian naval interpreter, Goshkevich, who was sojourning in Heda in Izu. Kosai decided to steal a passage to Russia by Goshkevich’s suggestion. In Russia, Kosai became an interpreter, calling himself Vladimir Iosifovich Yamatov, and compiled a Japanese-Russian dictionary entitled Waro Tsugen Hiko with Goshkevich. In the postscript of the dictionary, he called himself Kosai Tsubaki.
It is believed that his past preceding Russia was checkered with many uncertain aspects. It is said that he defected from his clan, became a person of Belial, and that he eventually became a Buddhist priest. He spent about 18 years in Russia. In 1873, Kosai returned to Japan after being told by a court noble and politician, Tomomi Iwakura, who was visiting Russia that the new government had no intention of charging him for his crime of defecting to Russia. The Russian government supplied Kosai with traveling expenses and a pension to thank him for years of service.
Became the bridge between Japan and Russia and lived in Shibakoen in his last days

After returning to Japan, Kosai stayed at the house in Shiba Nishikubo (now Toranomon 3-chome) provided by Viscount Sukeyoshi, the grandson of the head of the Kakegawa clan, Suketomo Ota. The news about Kosai immediately traveled all over town, and he held meetings to talk about his experiences in Russia almost daily in the nearby main temple of Koen Temple and Seiryu Temple. Later on, a new residence was built for him by the Meiji government on the grounds of Zojo Temple in Shibakoen. Kosai live there, but he used the house in Shibanishikubo for meet with guests and to sort out his documents. Politicians wanting to obtain living information about Russia and students wishing to learn Russian frequented Kosai’s office in Shibanishikubo, turning it into a sort of private school, and the place was always alive with voices chatting in Russian. Kosai’s eventful life ended when he was 65, and he was buried in Gensho Temple in Takanawa.