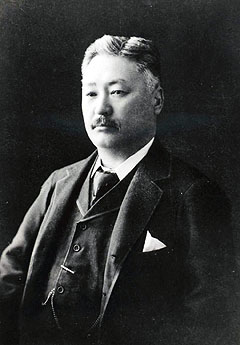 Takashi Masuda関連写真
A collection maintained by MITSUI BUNKO (Permission to reprint must first be obtained from MITSUI BUNKO.)

1848-1938. An industrialist. The first-born son of a local government administrator of Sado Island In 1863, Takashi accompanied the shogunate’s envoys to Europe, and after the Meiji restoration he ran a trading company in Yokohama. Takashi subsequently joined the Ministry of Finance on the recommendation of Kaoru Inoue, who rendered valiant services to the government. In 1876, Takashi was appointed the president of Mitsui & Co., Ltd. The company traded various goods including cotton threads, cotton cloths, coal, and rice as the leader of trading companies in Japan. With the establishment of Mitsui Mining Co., Ltd., on the Miike Coal Quarry site, which was granted by the Ministry of Engineering, Takashi developed Mitsui & Co. into a massive general trading company and contributed to the process of the Mitsui conglomerate. His trade name was Donno, and he was known as an illustrious master of tea ceremony and a collector of antiques.
Became the interpreter for the American Consulate General at the tender age of 14

At the end of the shogunate era, the American Consulate General was in Zenpuku Temple in Azabu, where the U.S. Consul General Townsend Harris and his interpreter Henry Conrad Johannes Heusken (later assassinated) were stationed. Takashi worked there as the shogunate’s interpreter for foreigners at the tender age of 14. It is said that Harris was a difficult man and his shouts could be heard in Takashi’s room two rooms away. Takashi was inspired by Western culture, and when he returned from Europe with the envoys, he studied English further at the Hepburn School (later Meiji Gakuin University) in Yokohama, which was conducted by Mr. and Mrs. James Curtis Hepburn. He later became the first president of Mitsui & Co., Ltd., at the age of 29. Takashi developed the company into Japan’s largest general trading company, making approximately 200 million yen a year in the 1910s, which accounted for nearly 20% of Japan’s total trade at the time.
A relief monument of Harris in Zenpuku Temple was inaugurated by Takashi and others in 1936. In his last days, he enjoyed the world of tea ceremonies and died at the age of 91.