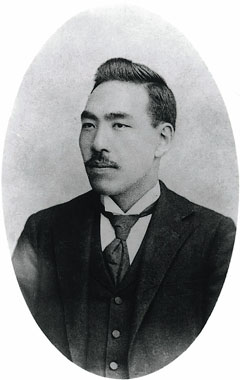 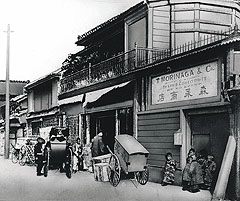 1865-1937. An industrialist. Born in Hizen Imari (now Saga Prefecture). Taichiro was young when his father died, and, estranged from his mother, he lived with different relatives in different places. He worked in the ceramics trade in Yokohama and went to the United States at the age of 23, where he converted to Christianity. On his second visit to the U.S., he studied the manufacturing techniques of confectionaries, and in 1899 he founded the Morinaga Western Confectionary Shop in Akasaka. The company later changed its name to Morinaga Confectionary. Its milk caramel was a great success, and Morinaga for the first time manufactured chocolates from cacao beans in Japan. After retirement, Taichiro devoted himself to spreading Christianity and died at the age of 73.
Founded a company in Akasaka Tameike based on his belief that making confectionaries was his God-given occupation

Taichiro received a piece of candy from a stranger when he went to the United States. That candy changed his fortune drastically. Once he completed his 10-year confectionary-making training in the U.S., he started the Morinaga Western Confectionary Shop on a 71-square-feet piece of land in Akasaka Tameike on the edge of the city. When Taichiro moved the company the following year to Akasaka Tamachi’s main street, the shop suddenly became popular among the wives of foreign ministers, and its reputation spread to the general public across Japan through newspaper ads. Taichiro recruited a fellow Christian, Hanzaburo Matsuzaki (later the company’s 2nd president), and they developed the business from Morinaga Shop to Morinaga Confectionary. Morinaga’s trademark angel was inspired by the marshmallows Taichiro frequently made, which was also called Angel Food. When the Great Kanto Earthquake occurred, he distributed large amounts of sweets to evacuees in Shibakoen and led the rescue operation in the afflicted areas. Many people attended his funeral in the chapel of Aoyama Gakuin University in remembrance of his virtues and accomplishments.