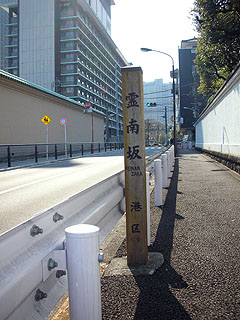 1583-1643. A priest of Rinzai sect Buddhism. Born in Hyuga Obi (now Nichinan city, Miyazaki Prefecture). Suroku studied Buddhism in Kyoto and Nara under Priest Sokei Jouzan and was approved by Priest So-on Yoshizawa of Daishin-in Temple in Myoshin Temple to become a priest. When the head of the Hinata Obi clan Sukenori Ito built the Tozen Temple in Edo, Suroku was invited to inaugurate the temple. He was also active as the teacher of warfare to Ieyasu and Hidetada Tokugawa and served in the Battle of Sekihagara. Suroku moved to Myoshin Temple around 1624. He was the 117th priest of Myoshin Temple, and his posthumous name is Daitenpokan Zenji.
The name of Reinan Hill derived from priest Suroku Reinan, who opened the Tozen Temple

Tozen Temple of the Rinzai sect Myoshin Temple group was opened by Priest Suroku in 1610, using the mansion of Sukenori Ito (who converted to the Rinzai sect) near Tameike. Back then, the Temple was called Reinan-an; this was used to name Reinan Hill, which stretches from the American Embassy to the Hotel Okura. The site later became the property of the shogunate, and the temple moved to its present location in 1636. The temple grounds contained many temple buildings, such as Kosho and Shoju, but they burned down in a fire after Meiji, and their splendor was lost. However, visitors can still see the stunning tombs of various daimyo, including Sukenori Ito. At the end of Meiji, the temple was used as the British Consulate General, and the first minister Sir Rutherford Alcock lived there. However, an incident called the Tozen Temple Incident occurred, in which Imperial supporters of the Mito clan attacked Sir Rutherford. The inner library used as the British Consulate General has been preserved, and there is a monument marking the site of the lodgings in front of the temple gate.