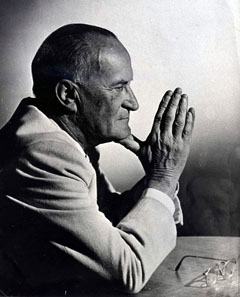 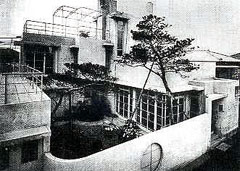 1888-1976. An architect. Born in Kladno, Bohemia (now Czech Republic). Antonin was a graduate of the University of Technologies (FA ?VUT) in Prague. In 1919, he arrived in Japan as a design assistant to Frank Lloyd Wright for the construction of the former Imperial Hotel. When he completed his work, Antonin stayed on in Japan and opened his own practice. He returned home as a result of the deterioration of international affairs, but returned to Japan after World War II and produced many modernist architectures. His leading works include the St. Luke’s International Hospital, 9Buildings in Tokyo Women’s Christian University, and Readers Digest Tokyo Office. Antonin died in the United States.
Produced many works from official residences of ambassadors to mansions of famous writers

Antonin spent 44 years in Japan before and after World War II and created simple yet rich spaces by combining traditional Japanese with modernist architecture. His buildings remaining in Minato City include the American ambassador’s residence, the Embassy of Canada, the Sacred Heart Elementary School building, St. Albans Church, and private mansions. The American ambassador’s residence built in 1931 was designed in collaboration with Harold van Buren Magonigle and is famous as the place where the meeting of Emperor Showa and General MacArthur took place. The 2nd and 3rd floors of the building of the Sacred Heart Elementary School were chapels, and the organic pattern of the Imperial Hotel building was used. The Cunningham Memorial House, which was also the home of the musician Eloise Cunningham, was also designed by Antonin. He lived in a house on Reinan Hill before World War II (now Akasaka 1-chome) and set up a home and office in a residential area on the hill in Azabu Kogai-cho after the war, but neither of them remain. Antonin was also known to have had a friendship with the curio collector, Heibonji Mita.