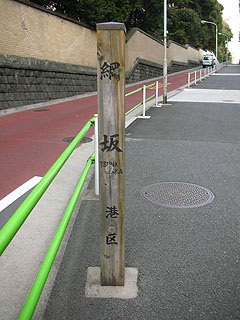 953-1025. A samurai of mid-Heian. Tsuna was a formidable force in mid-Heian and was referred to as one of the four Heavenly Kings, along with Kintoki Sakata, the retainer of Yorimitsu Minamoto (chief of the Imperial horse agency). Tsuna’s father, Ataka Minamoto, plotted to banish the Saga Minamoto family and was the Musashi Magistrate. Following his father’s death, Tsuna moved to Settsu and changed his surname to Watanabe, after the place where his mother-in-law was living. He is known for tales of vanquishing the notorious bandits Shuten Doshi and Kidomaru and chopping off the arm of an ogre on the Modoribashi Bridge in Kyoto.
Tsuna was the origin of the name Mita Tsuna-machi, according to tradition.

Mita Tsuna-machi is said to be the birthplace of Tsuna Watanabe. Toko Temple, near Ninohashi Bridge, is believed to be where he was born. The hill next to the Italian Embassy is called Tsunazaka, and the border of Mita 1-chome and 2-chome is called Tsuna no Tebikiszaka (Tsuna’s Hill). Old sites associated with Tsuna, who was known as an able samurai, may be found throughout the country, and it is believed that Mita Tsuna-machi is also one such place. During the time of Mita, it is stated in Edo Meisho Zukai (Edo’s Famous Sites) that it is an error to call the place a site associated with Tsuna. In Take-e Kibun (Record of Take-e), it is said that Tsuna’s place of association was not in this Mita, but in a different Mita, a place in Adachi county in Musashi (now Mita, Konosu city, Saitama Prefecture).