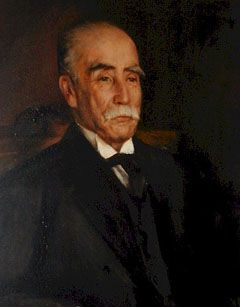 1842-1922. Educator and politician. Although he was born into a family of the lowest-ranking Shogun’s retainer, he studied at the Shogunate’s drill hall of the school for ahigher education because of his excellent academic performance at the temple school. After the Meiji Restoration he visited the United States, moved to Shizuoka where the Tokugawa family was detained, and contributed to founding the Numazu Military School and Numazu Junior High School. In 1890, he was elected in the first election of the House of Representatives and served as the member of the Liberal Party, the Kensei-kai (which later became the Liberal Democratic Party), and the Seiyu-kai. He is also known as the first principal of Azabu Junior High School and the director of the Tokyo Young Men’s Christian Association.
He established Azabu Junior High School, which is filled with liberal ethos

In 1994, the Toyo Eiwa School opened its doors at Higashi Toriizaka in Azabu Ward (now 5-chome Roppongi), and Ebara served as the administrator (vice-principal and general manager) from 1889. In the beginning, the building of the boys’ school and the one of the girls’ school stood next to each other. Ebara acceded to the position of Toyo Eiwa School principal in 1893, and the school changed its name to Azabu Jinjo Independent Junior High School in 1895. Although he had hard looks that reminded people of an old samurai, Ebara he was tolerant toward student mischief, and loved humor. He was an approachable principal who talked to his students about his near-death experiences during the imperial restoration. He lived in the school dormitory with the students, and he was so loved by them that they would rush to his side to show their respect, even wash his back if they met him at the bathhouse. In May 1922, he ended his life at the age of 80 the day after he had accompanied his students on the annual school trip.