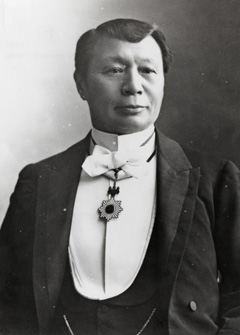 Kihachiro Okura関連写真
A collection maintained by the Okura Shukokan Museum

1837-1928. Industrialist and collector. Okura was the founder of the Okura conglomerates. He left his hometown of Niigata at the age of 18 and opened a gun shop in Edo. He made enormous profits by selling weapons to the new government forces in the Boshin War. He founded the Okura-gumi Shokai in 1873 and established a conglomerate mechanism in the Taisho era. As well as being engaged in the establishment and management of many companies, including Tokyo Dento and Teikoku Hotel, he also contributed to cultural projects, such as the establishment of Tokyo Keizai University. The founder of the Hotel Okura, KIshichiro Okura is his firstborn son.
Built Japan’s first private museum, the Okura Shukokan in Toranomon

Kihachiro, who made a fortune in his lifetime and lived in Toranomon, was a collector of Oriental antiques. In fear of valuable artworks flowing out to other countries, he built Japan’s first private museum, the Okura Shukokan, in 1917 by donating manycultural assets he had collected, the land, and the funds. The 5-story building stood on a property of about 10,000 square meters (2.5 acres), but it was damaged in the Great Kanto Earthquake. The Okura Shukokan that now stands adjacent to the Hotel Okura was rebuilt in 1928; it was based on a design by Chuta Ito, who is known for his design for Tsukiji Honganji Temple, and is designated as a cultural asset of Japan. The museum houses 2,000 pieces of Oriental paintings and sculptures, including such national treasures as the wooden statue of Samantabhadra and 35,000 volumes of Chinese literature.

Okura also put his money into schools. In 1900, he founded the Okura Business School, the predecessor of Tokyo Keizai University, on a property next to the present Hotel Okura in the old Aoi-cho in Akasaka. He contributed to the training of human resources equipped with business knowledge and ethics equal to those of Western countries.