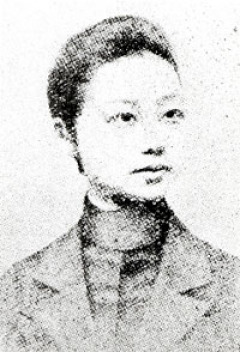 1859-1941. Physician. Born in Aomori Prefecture. After graduating from Yokohama Kyoritsu Girl’s School, she served as an English teacher at Sakurai Girl’s School. At the age of 25, she married an art teacher, Senkichiro Okami, and moved to America. She studied at the Female Medical College of Pennsylvania and became Japan’s first female doctor of medicine.
Opened a clinic in her own home in Akasaka as the first female doctor of medicine

Keiko and her husband, Senkichiro, were both Christians. The brother of the devout Senkichiro, Kiyomune, had devoted his efforts to founding the Dai-machi Church (now the Takanawa Church), and he established the Shoei Girl’s School, which was the predecessor of the Shoei Girl’s Senior High School in Shirokanedai. After returning home from studying abroad, Keiko worked at the Jikei Hospital (now the Tokyo Jikei University School of Medicine) at the invitation of Kanehiro Takaki and later opened her practice in her own home in Akasaka Tameike. After closing the practice, she taught again as the vice-principal of Shoei Girl’s School.

During that time, a plan for a rest home Eisei-en for sick women had arisen, and she opened the Akasaka Hospital Branch Hospital Eisei-en in 1897 (it was not located in Akasaka, but in Toyotama, Tokyo) with the cooperation of a friend, Mrs. True. As chief of the clinic and while she established a school of nursing in the clinic’s premises and engaged in the training of nurses, she started a dispatch nurse system. However, because the clients were limited to foreign female preachers, their scarcity caused the clinic to close after nine years. She retired because of breast cancer and spent a quiet life of faith and gardening.