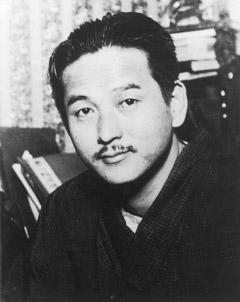 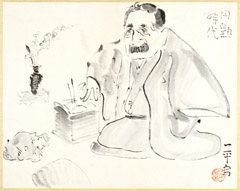 1886-1948. Manga artist. After graduating from the Tokyo School of Art, he produced theatrical designs for the Teikoku Theatre. In 1910 he married Kanoko Okamoto, and after the birth of his first son, Taro, he was recognized by Soseki Natsume and joined the Tokyo Asahi Shimbun. He became popular for his style of combining manga (cartoon books and comic strips) with clever and refined writing and became one of the most popular artists of the manga world in the Taisho era. He also put his efforts into training younger people, and after retiring as a leader in the world of manga, he helped his wife in her work as a novelist.
Nurtured many manga artists by opening Ippei Juku in his own home

After marrying Kanoko and started married life in his family home in Kyobashi, he spent most of his time in places in Minato City, such as Aoyama Kita-machi in Akasaka Ward, Hakkin Sanko-machi in Shiba Ward, and Aoyama Minami-machi in Akasaka Ward, until he moved to Hamamatsu and Gifu during World War II. In the early Showa era, he opened a school for budding manga artists called Ippei Juku and taught many students, including the political cartoonist Hidezo Kondo and genre cartoonist Yukio Matsuura.