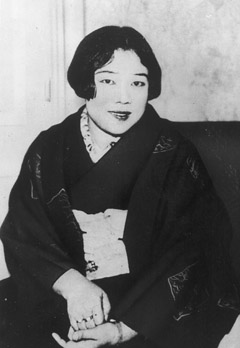 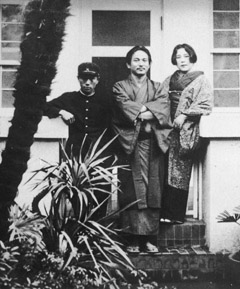 Kanoko Okamoto関連写真
(Bottom) The Okamoto family at home in Aoyama Takagi-cho (1928). Provided by the Taro Okamoto Memorial Museum in the city of Kawasaki

1889-1939. Tanka Poet, writer, and Buddhism expert. The mother of Taro Okamoto. She published her works Myojo and Subaru and developed her gift for short poems. In 1910, she married the artist Ippei Okamoto and gave birth to Taro the following year, but while emotionally suffering from the ruin of her birthplace and a marital struggle, she entered the world of Buddhism. In 1929, she and her family moved to Paris, and when she returned home , made a literary debut with Hato wa yamiki based on the life of Ryunosuke Akutagawa, the acclaimed novelist. Although she went on to publish many great works such as Hahako Jojo (Mother and Children’s Lyrics) and Rogisho (The Aging Geisha), she collapsed from a stroke while busily working, and this ended her life at the age of 49.
Spending the days with young Taro in her home in Aoyama

Kanoko was born in the townhouse in Aoyama Minami-machi in Akasaka Ward (now 2-chome Minamiaoyama) as the first daughter of the Onuki family, an old established family of Kawasaki City in Kanagawa Prefecture. After marrying Ippei and giving birth to Taro, she moved with her family to a 2-story house with an atelier in Aoyama Kita-machi in Akasaka Ward (now Kita-aoyama). In later years, her son described their lives back then in his essay entitled “Namami no haha”: “When I was little, my father worked for the Asahi Shimbunsha and returned home only late at night. Mother and I lived quite alone almost throughout the day, as if we were isolated from the world in our house in Aoyama.”

(Abbreviated) “My mother used to sit at her desk facing the garden in a half-lighted room with the shoji screens (paper-covered doors) drawn, working her writing brush quietly on a strip of paper or on colored paper.