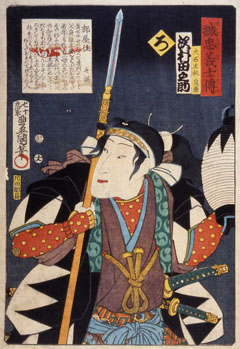 On December 14, 1702, Oishi Kuranosuke Yoshio and 47 former Ako clansmen avenged the death of their lord, Asano Takuminokami Naganori, by killing Kira Kozukenosuke Yoshitaka at his mansion. After attaining their long-cherished desire, the men retreated to Sengaku Temple and reported the success of their revenge by offering Kira’s head in front of Naganori’s tomb. The men committed a ritual suicide at the daimyo mansions of their respective guardians on February 4 the following year, an act the Shogun had commanded. The story of this series of incidents that began by Naganori’s attack by sword on Lord Yoshitaka in the Corridor of the Pines is still handed down to this day as Chushingura.
The “path of the righteous men” who rush to their late lord’s side

The Kira Manor was near Ekoin Temple south of the present Ryogoku Station. The Ako ronin, who had attained their long-cherished wish, went southward along Sumida River, crossed the Eidai Bridge, the Shiodome Bridge, and the Kanasugi Bridge and in about two hours arrived at Sengaku Temple. The Shogunate considered the men’s punishment for this incident after separating them into four households, including Lord Hosokawa of Higo, and ultimately all of the men were ordered to commit suicide (seppuku). Their remains were buried near the tomb of their lord in Sengaku Temple. Kichiemon Terasaka, who had disappeared while the men retreated to Sengaku Temple, is said to have been ordered by Kuranosuke Oishi to report to Yosenin (Naganori’s wife) and the bereaved families of the men. Although he later surrendered, Terasaka was pardoned and lived out his natural life. He was buried at Sokei Temple in Azabu. The present tomb at Sengaku Temple was erected in 1868.