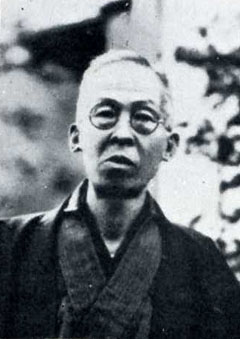 1872-1939. Playwright and writer. After graduating from Tokyo Furitsu Junior High School, he tried to become a playwright, but began writing stage reviews as a journalist for the Tokyo Nichinichi Shimbun newspaper (now the Mainichi Shimbun) from 1890 as a result of financial difficulties and started to use a pseudonym, Kyokido, which he later changed to Kido. In 1911, he gained popularity when the 2nd Ichikawa Danzaburo performed his play Shuzenji Monogatari (The Tale of Shuzenji), and he then went on to write such popular kabuki pieces as Toribeyama Shinju and Bancho Sarayashiki. His stories Hanshichi Torimonocho (The Hanshichi Detective Stories) inspired by Sherlock Holmes and known as Japan’s first detective stories.
Hanshichi Torimonocho (The Hanshichi Detective Stories) was created from a friendship with an elderly person in Akasaka

Okamoto was born in Shibatakanawa as the first son of Keinosuke, a senior retainer of the Shogunate. After the Meiji Restoration, Keinosuke worked at the British Legation, which used to be in Shibatakanawa. During his budding journalist years, Kido paid frequent visits to an elderly person’s house in Akasaka, who became the inspiration for Hanshichi later on, and the various episodes that he heard from the man became the base for Hanshichi Torimonocho (The Hanshichi Detective Stories) series. In the 69-volume series are stories that are reminiscent of the area of Minato City during the Edo period, such as “Tsu no Kuniya” (Kuniya of Tsu) based on the strange happenings around Akasaka Uratenma-cho; “Tojiname” (Chinese Candy) in which Hanshichi unravels mysteries set in the present Aoyama Street; “Yuya no nikai” (2nd Floor of the Bathhouse), which describes an incident at a bathhouse in Atagoshita; and “Neko Sodo” (Cat Incident), which mentions Daradara City in Shiba Daijingu.