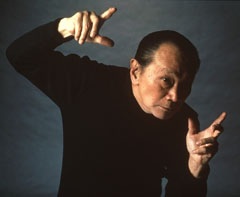 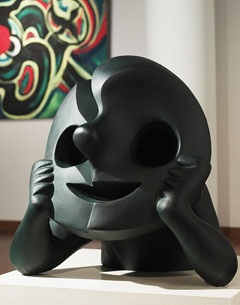 1911-1996. Painter and sculptor. He was the firstborn son of the painter Ippei Okamoto and the writer Kanoko Okamoto. In 1929 he withdrew from the Oil Painting Department of Tokyo Art School and went to France with his parents. He subsequently studied philosophy, psychology, and folklore at the University of Paris and returned to Japan when Paris fell in 1940.

He advocated avant-garde art and the symbiosis of polar opposites, and he produced controversial pieces continually after the war, such as Yoake (Dawn) and Jukogyo (Heavy Industry). He also focused on the culture of Jomon and Okinawa, and engaged in literary activity. In 1970, he produced Japan Expo’s symbol tower, the “Taiyo no to” (Tower of the Sun) as the theme exhibition producer. He is well known for his phrase "Art is an explosion!"
He set up his special atelier in Minamiaoyama

Raised in Takagi-cho, Aoayama, he entered Seinan Primary School in Aoyama in 1917, but spent his childhood in Keio Gijuku Yochisha Primary School after changing schools twice. His old home burned down during World War II, but after the war he built an atelier designed by Sakakura Associates and established the Institute of Esthetic Research. Sakakura Associates created a unique design for the building at Taro’s request. He worked for 50 years while based in Minamiaoyama. His home atelier was altered to create the present Taro Memorial Museum.