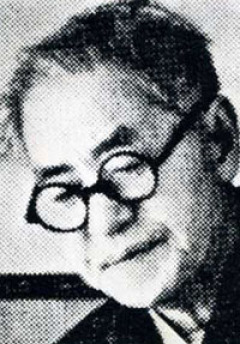 1884-1976. Poet. He participated in the new haiku movement of Hekigoto Kawahigashi, and launched the literary magazine Soun in 1911. In the Taisho era, he clashed with Hekigoto and had a huge influence on the haiku world by advocating free-verse haiku, which eliminated the seasonal theme and form. His students included unique poets such as Santoka Taneda and Hosai Ogiki. He has left more than 200 literary works, including collections of haiku, essays, and travelogues.
He advocated free-verse haiku from Azabu

Born as the only son of a general goods retailer in Shimmei-machi, Shiba Ward. Although he attended Seisoku Junior High School in Shibakoen, he was expelled after publishing a school newspaper in which he objected to the school’s education. The junior high school principal Soroku Ebara accepted such a boy as Ogiwara with the belief that “turning a bad student into a good one is education.” After entering Azabu Junior High School, he quit drinking and smoking, in which he had indulged since a young boy, and seriously engaged in studying for the exams for Ikko (now the University of Tokyo, Faculty of Arts). After enrolling at Ikko, he met Tsunenori Masaoka and awakened to writing haiku.

In 1906, he moved to Shimbori-cho, Azabu. He used his house in Shinbori-cho as the base for Sounsha from 1945 for the launch of the literary magazine Soun until the Great Tokyo Air Raids in 1945.