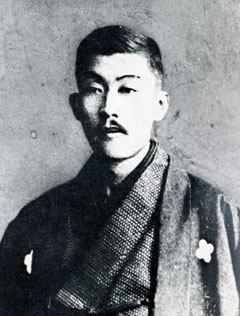 1867-1903. Writer. In 1885, Ozaki formed Kenyusha, the first literary society in the history of Japanese literature, with Bimyo Yamada and published the coterie magazine Garakuta Bunko. He subsequently received recognition for his work Ninin biku ni irosannge (The tale of two nuns and their sorrows in life) and joined the Yomiuri Shimbun (a daily newspaper) as a book reviewer while attending Tokyo Teikoku University. Although he published many popular works, such as Konjiki Yasha and Tajo Takon (Rancor), he died in 1903 at the young age of 35.
He loved Mt. Koyo and deepened his friendship with the literary magnates of Koyokan

Ozaki was born in Shibachumonmae. His mother died when he was 4, and he was sent to live with his grandparents in Shibashinmei-cho. Although he graduated from Baisen Primary School in Shibashinmei in 1880 and immediately entered Tokyofu Daini Junior High School (now Hibiya High School), he withdrew from the school after two years. From 1883 he studied at Mita English School in Atago-cho, Shiba Ward. He was proud of his childhood spent in Shiba, and he used the pen name Koyo, after Mt. Koyo of Zojo Temple.

In the Meiji era there was an exclusive members only restaurant called Koyokan on Mt. Koyo in Shiba Park. Because one of its founders was the first president of Yomiuri Shimbun, Takashi Koyasu, the place was frequently used for Yomiuri Shimbun parties, As a result, the writers of Kenyusa, led by Koyo Ozaki, started to visit the place frequently. Although Koyokan was the meeting place for literary magnates even after Koyo’s death, it was destroyed during the Great Tokyo Air Raids in Showa, and Tokyo Tower was built on its site.