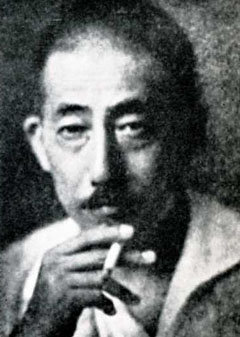 1881-1928. Playwright and director. In 1909, Osanai established Jiyu Theatre with the 2nd Ichikawa Sadanji (famous Kabuki actor). He built the foundation of contemporary theater by putting on translated productions of Ibsen, Chekov, and Gorkii. After traveling through Russia and Europe, he served as the research director of Shochiku Cinema in 1920. He also put his efforts into forming the Tsukiji Shogekijo Theatre with Yoshi Hijikata in 1924 and promoted an all-out movement for contemporary theater. He directed such pieces as The Three Sisters and The Cherry Orchard by Chekov, and produced many actors of the new school of drama.
Built an extensive network from Mita literature to Ryudokai

Although Osanai graduated from the Faculty of English Literature of Tokyo Teikoku University, he became in charge of lectures on dramatic literature at the Faculty of Literature of Keio University in 1910 at the request of Kafu Nagai. Among his students were budding Mita writers, such as Mantaro Kubota and Haruo Sato, who debuted with their prize-winning dramas chosen by Osanai. Moreover, Osanai also played the role of a guardian of such young writers as Junichiro Tanizaki by using an inn, the Shibahamakan in Shibaura, for the 2nd Shinsocho’s editorial meeting.

In the first issue of Daitokyo Hanjoki (Great Tokyo Prosperity Journal) published in 1928, he was in charge of the “Shiba, Azabu” edition and wrote about Ryudokai (a writer’s club), which was held in Ryudoken in Azabu. He describes with affection how writers such as Doppo Kunikida in the Meiji era talked frankly about literature and life.