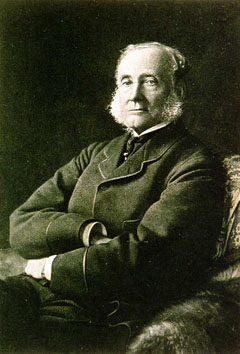 1809?1897. British diplomat. Alcock changed his profession from surgeon to diplomat at the age of 34. After serving as consul in China, he arrived in Japan as the British consulate general and diplomatic representative in 1859 and was later promoted to diplomatic minister. He applied a hard-line policy in starting trade with Japan and was often in conflict with the American minister, Townsend Harris. Although he was attacked by a masterless samurai of Mito at Tozen Temple where the British Legation was housed, he fortunately escaped danger. He was summoned back to Britain because he initiated the Bombardment of Shimonoseki attack in 1864 by the combined fleets of Britain, the U.S., France, and Holland.
Martyrdom of the first British minister and the tragedy of Tozen Temple

Alcock, who landed in Japan on the coast of Shinagawa, chose the Takanawa Tozen Temple from several proposed sites for the British Legation. The place was near the Tokaido Highway and Edo port, which were strategic points of transport, and though he was rather pleased by its serene and beautiful setting, Tozen Temple unfortunately became the stage of two incidents of attack.

In May 1861, fourteen masterless samurais of Mito, including Hanya Ariga, waited for Alcock’s return and entered the legation at midnight, claiming that his travels through Japan had fouled God’s land. Alcock’s secretary and the Consul of Nagasaki were injured, and there were dead and injured among the attackers and the security guards. The second attack occurred just 16 months after the first one, while Alcock was in Britain, and two British sailors were killed. The culprit was a samurai of the Matsumoto clan, Gunpei Ito, who was guarding the Legation, and he attempted suicide the following day. The series of incidents involving the killing of foreigners such as the assassination of Heusken, the Tozen Temple incident, and the Namamugi Incident became serious diplomatic issues that shook the Shogunate’s regime.