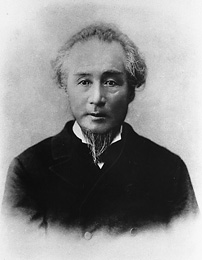 1823-1899. Politician. Katsu mastered navigation at the navy’s training school in Nagasaki and was the first Japanese to succeed in crossing the Pacific Ocean, as the captain of the Kanrinmaru in 1860. When the Imperial forces approached Edo in 1868, Katsu protested an immediate ceasefire and the bloodless surrender of Edo castle. He took on negotiations with Takamori Saigo on the Imperial forces’ side on his own and saved the city of Edo from war. After the Meiji Restoration, he became the Minister of the Navy and Councilor, later a count and the Privy Counselor. He put his efforts into getting absolution for Yoshinobu, who was viewed as an enemy of the court, and saving the livelihoods of the Shogun’s former retainers.
The meeting with Takamori Saigo at the Satsuma clan manor in Takanawa

Kaishu became an apprentice to the scholar of Western studies, Seigan Nagai, in the Kuroda clan manor in Akasaka Tameike and moved from his main residence to Akasaka Tamachi in 1846. In 1850 he opened a school of Western studies on Tamachi Naka Street in Akasaka. He later lived in the present 6-chome, Akasaka, from 1859 to 1868.

On March 13, 1868, just before the all-out attack on Edo castle, he met with Takamori Saigo at the Satsuma clan villa in Takanawa. It is said that the historical bloodless surrender of Edo castle was achieved after the final decision was made at the Satsuma clan manor in Tamachi on the following day. After the Meiji Restoration, Kaishu moved to Shizuoka Prefecture, and then he moved again in 1872 to Hikawa-cho in Akasaka. He spent his last days receiving many guests at his final residence.