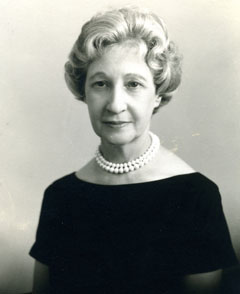 1899-2000. Musician. Born in Pennsylvania, USA. Cunningham arrived in Japan with her preacher father at the age of 2. She later went back to the States on her own and majored in music at Oberlin College and Columbia University. She revisited Japan after graduating from the university, and through her teachings at the Toyo Eiwa Girl’s School, she started the activity of getting Japanese children to listen to live classical music. In 1939 she established Music for Youth, Inc., in Tokyo, and began offering free concerts for children. Although her activities temporarily ceased during the war, she continued to offer dedicated services throughout her life.
She continued the activity of spreading classical music throughout Nishiazabu

In 1953, she built a house next to the Nezu Museum, in Nishiazabu, and used it as the offices of Music for Youth, Inc. The building was of timber construction designed by the famous Czechoslovakian architect, Antonin Raymond, and it was a simple yet beautiful home-cum-office set against the borrowed landscape of the garden of Nezu Museum. She continued to live on her own even in her old age, and worked hard on producing concert programs, pamphlets, and posters.

In April 1958 she wrote in the Tokyo Shimbun newspaper: “Tokyo is filled with such a diverse range of captivating sounds, more than any other city in the world.” Cunningham loved the sounds with the sentiments of life, such as the clatter of wooden sandals, the flutes and drums played by street musicians, the horn of the all-night ramen stand, and the wooden clappers of the night patrol.