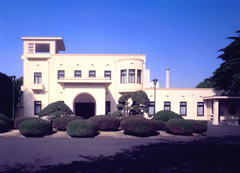 1887-1981. The eighth prince of Prince Kuni (Asahiko). After studying at Gakushuin and the Central Army Cadet School, he entered the Military War College and Military Academy. In the same year, 1910, he established the Prince Asaka household and married Princess Nobuko, the eighth daughter of Emperor Meiji. He began adopting the Art Deco style in building his new home after returning in 1925 from three years of study in France, where he had discovered the Art Deco style at an exhibition. This building is now open to the public as the Tokyo Metropolitan Teien Art Museum.
A masterpiece of Art Deco style, the Palace of Prince Asaka

The event that compelled Prince Asaka to build a palace, referred to as the “Art Deco work of art,” was a traffic accident he was in while a student in Paris. While he spent his days convalescing from his crippled leg with her Royal Highness, who had rushed from Japan to be with him, the imperial couple absorbed the latest Western European culture and acquired a high sense of aesthetics. They were captivated by the innovative decorative style of Art Deco at the Art Deco Exhibition, Exposition Internationale des Arts D'coratifs et Industriels Modernes in Paris during the third year of his stay in Paris.

After returning to Japan, the couple planned the building of their palace on imperial land granted to them at their marriage. The building was unprecedented. Although the imperial carpenter of the Imperial Household Ministry was in charge of design, the essential parts of the interior were directed by Henri Rapin, the leading figure and deputy chairman of the Association of Decorative Artists at the Art Deco exhibition in France, where he had a hand in designing several of the pavilions, especially the Ambassade de France. The Palace of Prince Asaka was completed in 1933, in which Rapin was responsible for the design of seven rooms, But soon after it was finished, the princess suddenly died. It was as if her life had also finished now that the completion of this grand building had been brought to an end.