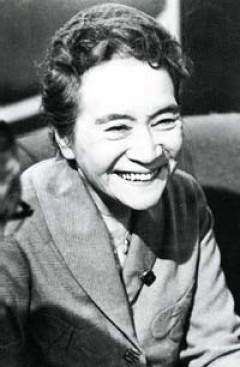 1888-1981. Feminist activist and politician. She joined Raicho Hirazuka’s Seitosha while attending Joshi Eigaku Juku (now Tsuda College) and worked actively as a female reporter for the Tokyo Nichinichi Shimbun newspaper (now Mainichi Shimbun). In 1916, she stabbed Sakae Osugi as a result of relationship entanglements and served two years in jail. She subsequently established herself through literary and critique activities and engaged in the feminist movement after the war. She also contributed to establishing the antiprostitution law as a member of the House of Representatives.
“The new woman” who lived her days turbulently in work, love, and the cause

Kamichika, who moved houses habitually, lived in various places after she moved up to Tokyo from Nagasaki. She lived in Minato City during her 20s and 30s, and that period determined her course of life. When she joined the Tokyo Nichinichi Shimbun in Yuraku-cho, she lived in Tamura-cho, Shiba, and exerted herself in interviewing well-known figures as a city news reporter. On the other hand, she had a close encounter with Socialist ideas and published novels and critiques by joining the French Literature Study Group run by the anarchist Sakae Osugi. Her relationship with Osugi began after she moved to Kasumi-cho, Azabu.

It was not long before she started to suffer by the mixed relationships with Osugi, who advocated free love, his wife, Yasuko Hori, the social activist Noe Ito. She surprised the world by causing the so-called Hikage Chaya Incident in Hayama, seriously injuring Osugi by stabbing him. In 1919, after her release from jail, she started writing and married in the following year. She established her new home just down from the back gate of Aoyama Gakuin and had three children, but she was later divorced. After World War II, running for election with the Socialist Party, which had its headquarters in Shimbashi, she was elected to the House of Representatives and served four terms until her retirement at the age of 81.