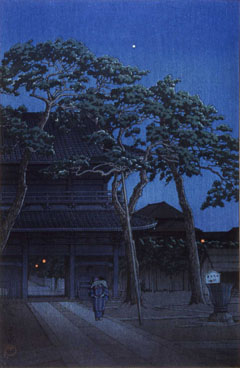 1883-1957. Woodblock artist. Born into a family of braid merchants, Hasui studied Japanese painting in his teens and oil painting at the Hakubakai Aoibashi Yoga Kenkyujo (Hakubakai Aoibashi Oil Painting Institute) as an adult. After studying under Kiyokata Kaburaki, he developed as a woodblock artist. In 1918 he began a production of more than 500 types of landscape prints, starting with three pieces published by the Watanabe Hanga Shop. His works include “Tabimiyage I-III” (Souvenirs of Travel I-III), “Nihon Fukei Senshu” (Japanese Scenery), and “Tokyo Nijukkei” (20 Tokyo Scenes).
“The Hiroshige of the Showa era,” who lyrically depicted the landscapes of his hometown Shiba

Hasui, who was born in Rogetu-cho in Shiba Ward (now Shimbashi), loved painting from when he was a young boy and learned how to paint from Bokusen Aoyagi, who lived in Shiba Shimmei-cho. At the age of 27 he became a student of Kiyokata Kaburaki and was given the trade name Hasui. After marriage, he lived in Atagoshita-machi in Shiba Ward, which was called Sendai Manor, and continued his activities as an artist. When he was 35, Hasui had some dramatic developments with woodblock prints produced by his fellow student Shinsui Ito and the woodblock merchant Shozaburo Watanabe.

Hasui received Watanabe’s patronage and published his first work “Shiobara Okanemichi” (The Okane Path at Shiobara) with him. He went on to successively release works that lyrically depicted the landscape of various places in Japan and was acclaimed the leading artist of newly styled woodblock prints at home and abroad. There are quite a few works about his hometown of Shiba, and his works include the pieces he produced to commemorate his registration as a cultural asset: “Sojoji no Yuki” (Snow at Sojoji Temple), “Tokyo Junikagetsu” (Twelve Months of Tokyo), “Azabu Ninohashi no Gogo” (Afternoon at Ninohashi in Azabu), “Shiba Zojoji” (Shiba Zojoji Temple), “Shin Tokyo Hyakkei” (One Hundred Views of New Tokyo), and “Shiba Daimon no Yuki” (Snow at Shiba Daimon).