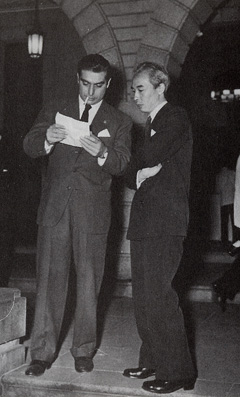 1913-1970. Cultural exchange producer and Prince Takamatsu’s special private secretary for international relations. Born as the illegitimate child of a count and a member of the House of Lords, Taketaro Goto (a prominent politician), Hiroshi was raised as the adopted son of the Kawazoe, wealthy family. He lived in Paris for six years from 1934 and started the work of promoting international cultural exchange. Until his death, he completed many cultural exchange projects, many of them between Japan and Europe. Furthermore, the restaurant named Chianti that he started in 1960 with his wife, Kajiko, is well known as a place where a true mixture of intellectuals and artists gathered.
An impresario of international exchange and the Chianti restaurant in Iikurakata-machi

Kawazoe’s achievements range widely, but what he called his true profession was the work of directing the entire operation of the Korinkaku banquet hall in Takanawa, used for entertaining the General Headquarters of the Allied Forces and state guests, when he became Prince Takamatsu’s special secretary for international affairs just after the war. The restaurant Chianti he started in Iikurakata-machi (now Azabudai) with his wife became a caf? society where various talents regardless of fame gathered, and its snobbish atmosphere is still talked about like a legend.

However, what Kawazoe devoted his time and passion to most was a wide variety of cultural exchanges, such as the production of the overseas performances of Azuma Kabuki, led by Tokuho Azuma; the U.S.-wide performance of bunraku (traditional puppet shows); the invitation of his best friend and press photographer Robert Capa to Japan to promote his work; and the promotion of Suna no Onna (Woman of Sand) at the Cannes Film Festival.