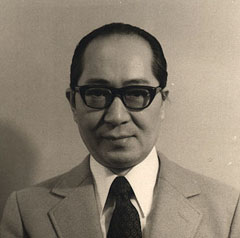 1925-1978. Noh actor (Kanze Style main actor). Hisao Kanze was the firstborn son of the Tetsunojo Kanze VII. He studied under his father and grandfather, Kasetsu Kanze, and made his stage debut at the age of 4. He performed his first Dojoji when he was 19. In 1962 he went to France as the first Japan-France theatrical exchange student at the invitation of the French government, where he performed and deepened exchanges with the famous actor Jean Louis Barrault. He played an active role as the new standard-bearer of the Noh world as he revived Noh as modern theater.
A thespian who actively worked internationally with Tessenkai (described below); the Minamiaoyama district was his base

Praised as a genius from a young age, Hisao withdrew from Keio Junior High school when he was 14 and entered the world of Noh professionally. His base was Tessenkai, a Noh performance group led by Tetsunojo Kanze in Minamiaoyama. Looking for a way to pass on the classical art of Noh and to revive it for the modern age, he joined the Zeami Densho Society (Zeami was an influential actor and playwright of the 15th century) and participated in avant-garde theater. He later formed the Meinokai with Noh actors and actors of the new school of drama and performed in Oedipus Rex (by Sophocles) and Waiting for Godot (by Samuel Beckett).

In 1953 Hisao formed Hananokai (a Noh appreciation society) with his brothers Hideo and Shizuo Kanze and the Nomura brothers, Mannojo and Mansaku; the latter were famous Noh performers. He performed Hashitomi (a Noh play) on Tessenkai’s stage for Jean Louis Barrault (a famous French actor) and the famous Theatre d’Orsay group, of France, then visiting Japan, and he also went to France as a foreign student. These activities built bridges between the theatrical arts of East and West and raised the appreciation of Noh internationally. The Tessenkai Noh theater group continues with contemporary Noh performances based on its original assertions even after Hisao’s death.