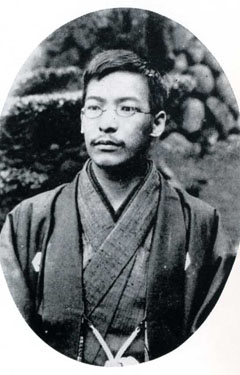 1876-1952. Poet. Although Kambara won a prize for his novel Daijihi (Great Mercy) in the Yomiuri Shimbun (newspaper) literary contest, he later devoted himself to writing poems because he felt that he had limitations as a writer of novels. From 1902, he wrote books of poems, such as Kusa Wakaba (Fresh Leaves) and Shunchoshu (Spring Bird Collection), and established a symbolic style. He eventually lagged behind the times, resulting from the emergence of the new freestyle movement, but in 1947 he was again in the limelight with the publication of his autobiographical novel, Yume wa yobi kawasu (Dreams Call On).
Served as the manager of Ryudokai (Writer’s salon) and became the steward of the salon

In November 1904, Ryudokai began as young writers merged with a salon of painters that was organized by the art critic Toru Iwamura at the French restaurant Ryudoken in Ryudo-cho, Azabu. Kambara and Iwamura were friends, and Kambara also became acquainted with novelists, such as Katai Tayama, in his work as manager of the Ryudoken..